Oshawa VOTES political party has declared its intention to run a slate of candidates to contest the next municipal election. We have declared
"WE PROMISE" as our campaign theme. Our website will be www.WePromise.ca

While the party will have a wide-ranging platform, it's first order of business will be in returning ward voting to Oshawa.

Another major goal will be in defeating Mayor Gray and Councillors Pidwerbecki, Parkes, Marimpietri, Henry, Kolodzie, and Sholdra all of whom voted to rob you of your local ward representatives by replacing ward voting with the less accountable and less democratic
"General Vote". They wanted a "self-serving" electoral system that served them rather than the people of Oshawa.

In addition to a platform of "positives" our team will develop, we will be reminding the public of the growing collection of "negatives" identified below under the item--Oshawa City Council
"Hall of Shame". The Oshawa public, however, is invited to contact us to suggest additional isses you think we should consider.

Fortunately the general vote will make the task easier for the VOTES party as our team will be able to concentrate on one city-wide campaign rather than on seven ward campaigns.

ENTER "KEY WORD" TO SEARCH BLOG FOR ALL REFERENCES


1. "The city had no responsibility to inform the public about the referendum question"--Mayor John Gray (City Council Mtg., April 10, 2007)

3. "Our half million dollar loss at the GM Center actually puts us $700,000 above the $1.2 million loss at the Civic."--Mayor John Gray's "spin" on first year taxpayer losses of new GM Place (December 07 interview with CHEX TV's Dan Carter's "First Take LIVE) overlooking borrowing costs for GM Center which didn't exist for the Civic.

THE PEN IS MIGHTIER THAN THE SWORD...WRITE TO THE POLITICIANS AND THE MEDIA WITH THE LINKS GIVEN BELOW...LET YOUR VOICE BE HEARD!

YOU CAN ALSO HELP THE CAUSE BY E-MAILING THE LINK http://www.oshawaspeaks.ca/ TO ALL OF YOUR FRIENDS

BILL LONGWORTH was founder and chair
of Ward System Now, the activist organization that brought the ward system to Oshawa.

He personally presented the winning case to the Ontario Municipal Board in 1985 in a 21 day hearing, the longest of it's type in Ontario History.

Because Oshawa City Council has again voted to implement the General Vote, he is once again called to arms to preserve democratic ward voting for Oshawa.

Too much Spin! Let's be real!

Oshawa City politicians are forever stretching the truth about Oshawa...and we've had enough. Let's make it great rather than saying it's great. We'll all recognize our greatness when we achieve it.

We're forever being told that Oshawa is the third best place to live in the world, that it won design awards for our tax draining GM Centre, The Legends Centre and the South Oshawa Community Centre, has won marketing awards for its downtown restaurants, and that we'll a GDP growth leader in Canada through 2011.

It's about time that city politicians got down to brass tax to work toward solutions to our problems rather than spending inordinate amounts of costly staff time in entering contests and spending our tax money on spreading the word through news services and image marketers. Action is far more important than words!

Nowhere are we being told by city politicians that we have the highest property tax in the GTA, that we have the highest EI spike in Canada and that welfare rolls are on the rise. No where are we being reminded of the Cullen Gardens Miniatures fiasco, the sorry state of the downtown and its business failures often attributable to city staff red tape, or to raids on Durham College/UOIT students residences to seek housing agreements. Nor are we reminded by the mayor of his pleas for increased taxing increases to cover wild council spending sprees. Lastly, we are not reminded by the Mayor and Council of our future city council voting system that is not used in any large city in the country. Worst of all, we are not told that council refuses to communicate important information to its citizen. When city council voted to hold a plebiscite on our municipal election system, they refused to tell us the details of the plan, what the change would do for the city, why we needed a change, or indeed what the question meant as the mayor said it was not council's responsibility to inform voters about the question. They worded the question in a convoluted and difficult to understand way and kept it a secret until voters were confronted with it in the voting booth...Democracy requires an informed public and council strategized to limit public information.

Oshawa City Council demolished North Oshawa Arena and City Hall because of forward maintenance costs. >They have now voted to demolish Civic Auditorium with the same rationale. "These buildings are old," they argued, "and costly to maintain."

The North Oshawa Arena demolition, the City Hall demolition, and Rundle House demolition were all done by the same contractor who will undoubtedly be awarded the contract to demolish the Civic as well as Harman Park Arena and Children's Arena when they are scheduled for demolition.

The questionnable decision to demolish Oshawa's real estate assets, and strategically replace them with new arenas in the richer areas of Oshawa thus depriving children in the older areas of community ice facilities raises other questions. How is it that the one contractor is demolishing all of these buildings? Were they put out to tender? Were they tendered as a group even though council had not yet voted on their demolition? If they were were put out to individual tender, how come one contractor was able to come in with the lowest tender on all? Of course far more serious questions arise which I shall let astute readers identify for themselves!

In any case, the common rationale given by politicians and staff for the demolition of the old and replacement with the new was to save on maintenance and repair costs. This would lead to a belief that maintenance and repair costs would be negligible on the new facilties which have been widely acclaimed by the city for their quality of design and construction. In reality, and not at all communicated to the public by the politicians, is in its first three years, the Legends Centre has undergone major repairs with the disintegration of terrazo flooring in some parts of the facility and at the present time the walking track has been closed because of leaking roof problems. This is the very problem politicians claimed of "A" wing of city hall. They voted to tear that down! I wonder now in the interests of consistency whether they will take the same decision on the Legends Centre.

In the interests of "truth" and not the political "spin" justifying all of the expenditures, the pictures following will be proof positive about questions of "quality" and of the need for continuing maintenance and repair in even our newest facilities. If our newest facilities need ongoing maintenance and repair, what is the merit of the city hall argument to demolish and replace to avoid upkeep costs. It's like rebuilding your house when it needs to be shingled!

But hey!!! This city hall "bomb and rebuild" rationale keeps us on top of the heap as the highest taxed region in the GTA. It justifies our motto, "Prepare to be amazed!"

With such questionnable decision making and such wastage of citizen's hard earned tax dollars, no wonder that city council bunch wants to isolate itself from public accountability with the self serving general vote that protects their jobs until they die or retire.

Our "best-design-in-North-America" Legends Centre from December to March each year...I don't suppose city officials informed the judges of this major design flaw! They "snowed" them as they continually "snow" Oshawa taxpayers! 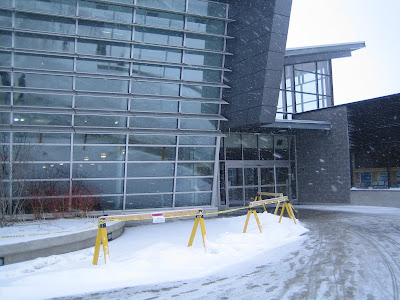 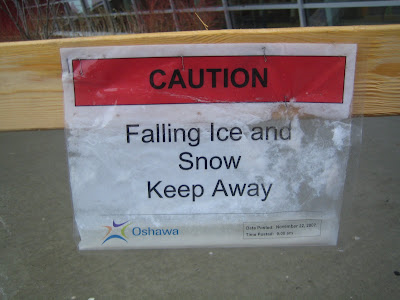 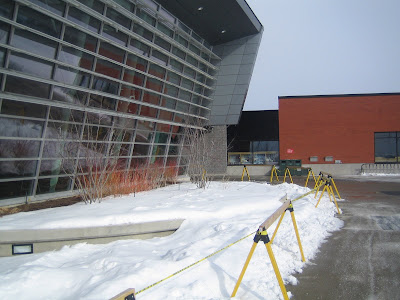 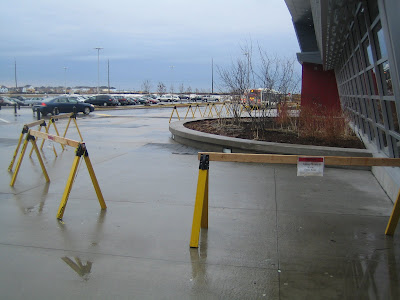 Our "best-design-in-North-America" Legends Centre has numerous cracks in the terrazo of the main hall...This looks like a "quality issue in this 3 year old building...perhaps the floor was laid on an unstable base and will only get worse over time! This absolutely destroys the merit of Council's rationale about destroying older buildings to avoid maintenance costs! Perhaps this defect continues under the ice pad floors! 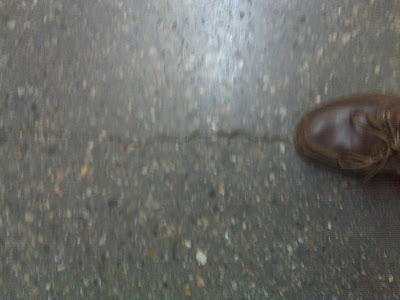 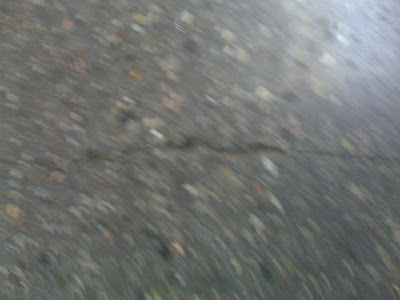 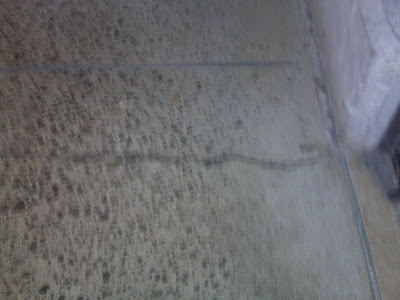 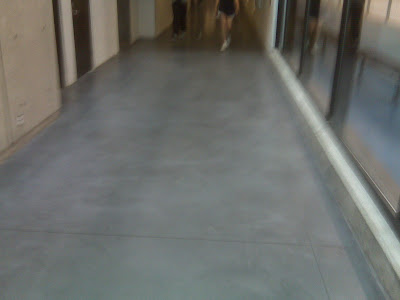 Our "best-design-in-North-America" Legends Centre has giant cracks in the concrete sidewalks leading to the main door...This looks like another "quality issue" in this 3 year old building...perhaps the whole structure was laid on an unstable base and will only get worse over time leading to perpetual and major repairs...perhaps even demolition of an unstable building! Sections of this concrete sidewalk have already been replaced once again leading to a major defect in council's thinking...they wanted to avoid ongoing maintenance costs in older buildings by demolishing them and rebuilding...So much for that brilliant idea that has cost taxpayers plenty! 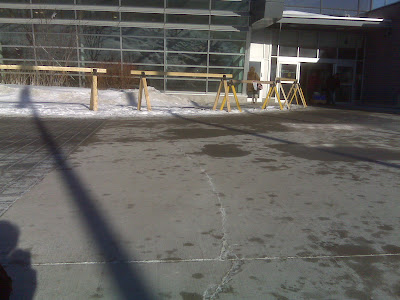 Posted by Site Administrator at 11:53 a.m. No comments: